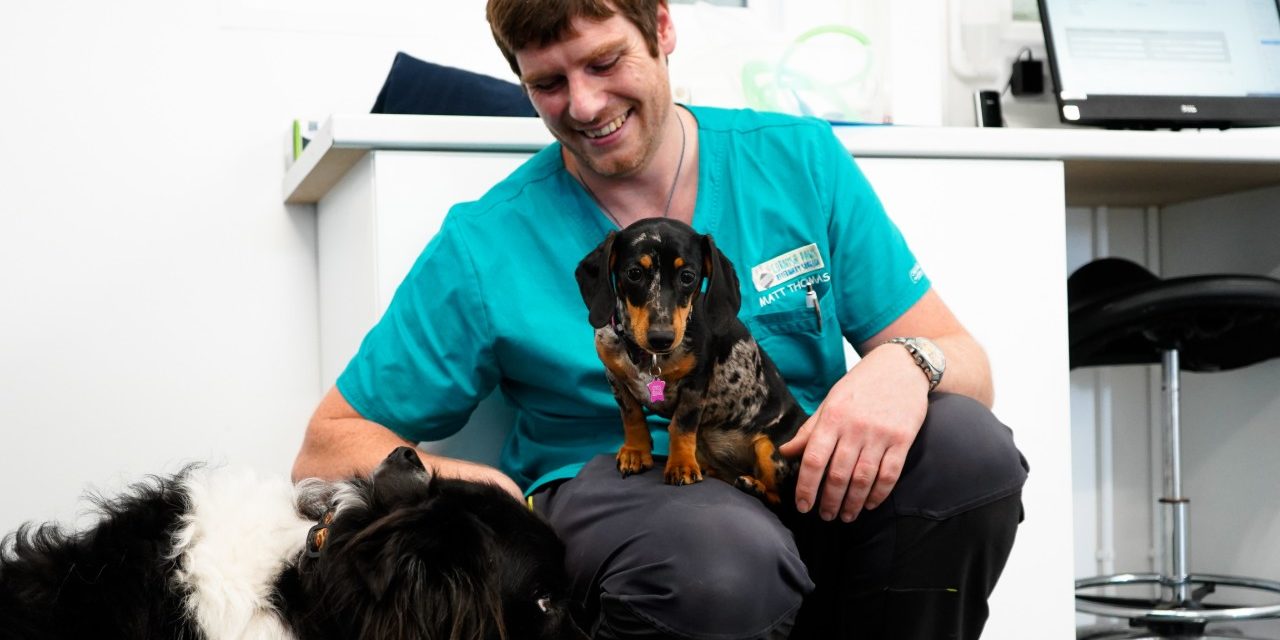 For Matt Thomas, it’s long been an ambition to open his own veterinary practice and in 2019 that hard work paid off with the opening of Cornish Paws, based in Penryn. Since opening its doors it’s been met with an overwhelmingly positive response, but the road to this stage has not always been easy.

With extensive veterinary training and experience behind him, Matt couldn’t have been better prepared for the day-to-day side of the business, but save for a GCSE in Business Studies, he had no prior experience running or starting his own business.

What Matt did have was an abundance of drive and determination, finding time to work towards his goal while juggling work and family commitments. “We started thinking about trying to start our own practice probably as long ago as at least three years or so ago… it’s taken that long to get everything in place and find the right building.” Matt explains “It’s not like I could just devote all the time to set this place up… we had a mortgage and food and kids to pay for, working full time, trying to do this in the evening.”

Working with A2F Business Finance Specialist Yvic Carr, Matt soon found he had access to all the knowledge and support he needed to take the crucial final steps to make his practice a reality.

According to Yvic, right from the off Matt had what it takes to run a successful business, having carried out a majority of research and legwork even before approaching Access to Finance:

“Matt was incredibly driven from the start and knew exactly what sort of business he wanted to run and why it was going to be successful. It was a pleasure to work with someone who had done a huge amount of research and knew their market inside out. Any information that we needed for our work Matt was able to provide quickly and accurately – leading to an engagement that was quick and successful.” – Yvic Carr

Before Matt could go on to create the runaway success that Cornish Paws has turned out to be, there were still plenty of obstacles to be overcome. This included finding a property that could accommodate assessment rooms, equipment and of course grant easy access for the all-important patients themselves.

In spite of two potential premises falling through, Matt stayed optimistic and eventually found the location that would go on to become Cornish Paws: “As everyone tells you, when places fall through that it happens for a reason, and you don’t believe them, but actually this is by miles the best place we’ve had out of the three. So it really worked out.”

With one location it was a case of a bank’s estimated property value not quite matching up with the asking price, something that Matt asked Yvic’s advice on.

“I’d ring Yvic about that pulling my hair out. In that situation, he said ‘Matt, you’re not going to close that gap… try this and if it doesn’t work, know when to walk away.’ That’s invaluable advice as well.”

The building’s inside is now unrecognisable from its former role as a school building, thanks to an extensive five-month-long refit that helped make the building fit for purpose, now featuring state of the art x-ray, ultrasound, and dental equipment as well as an in-house laboratory, kennels and cattery.

Because matt didn’t have the luxury of a large company backing his practice, even the equipment needed to be sourced by Matt, adding to the already considerable cost of the property.

Matt’s goal for the vet’s practice was to create a space where people can bring their animals and get the same great service each time they visit, while getting consistent treatment and advice: something that isn’t always available at larger, chain-run practices.

The benefits of being able to work without some of the hang-ups associated with larger practices are as beneficial to customers as they are to vets themselves, according to Matt:

“As much as vets are frustrated working for larger corporate companies, actually, I think clients are too. And they really like the fact that it’s family run, it’s independent, they get to talk straight to me, they get continuity.“

“We genuinely just try and be fair but reasonable with prices and how we treat people and we try and do the best job we can. And I think that comes across.”

Matt had already approached a number of sources to secure funding and was well on the way to getting his business off the ground before coming to Access To Finance, but found (as many would-be business owners do) that the requirements for getting accepted for business finance can be quite stringent, not only in terms of affordability, but also in terms of forecasting and business plans presented as a viable business plan to get buy-in from the banks.

Working with Yvic, Matt prepared everything he needed to put forward proposals to lenders, drawing on Yvic’s years of experience in Fund Management roles wherever possible to demystify some of the jargon and processes involved.

This can be a difficult to navigate process, especially for those that haven’t run their own business before, which is exactly what Access To Finance is here to help with, whether it’s a new business or you’re already well-established.

“Some things were flagged up that I had no idea even what they were. By the time I talked to Yvic, he’d just decipher them for us…. You could just put it past him and he knew exactly what it was and say ‘in that case, don’t worry about that. You just need to do this.’ It was really good.” -Matt Thomas

But one of the most helpful timesavers for Matt came in the form of a forecasting spreadsheet created by Yvic, which was an essential tool when putting together proposals for potential lenders. By putting in the business’s income and outgoings it gave a realistic view of EBITDA (Earnings Before Interest, tax, Depreciation and Amortisation) based on a number of different scenarios, even taking into account he difference in income earned by the different types of service provided by the practice.

“We’ve used that a huge amount to justify all that funding (…) [it] really helped us put a proper business proposal together with those projections.” – Matt Thomas

After years of planning, when Cornish Paws finally opened its doors to patients of all shapes, sizes and species they were met with an overwhelming response, immediately laying to rest any uncertainty that could have been left in anyone’s mind. Better still, the practice’s popularity is showing no signs of slowing down:

“You’ve spent all the money to get doors open and you wonder if anyone’s going to turn up… when we opened our doors on that Saturday morning, by half past nine we were swamped. I mean the place was heaving. It was brilliant… I could have cried and I didn’t get out of the consulting room to grab a bite for lunch until half four.” – Matt Thomas

For anyone starting up a business, it can easily snowball into what seems like a gargantuan task at times, but like Matt, dedication to a good idea that you truly believe in isn’t easy to put aside. For others in a similar situation to himself, wanting to start their first business and looking for a hand to make sense of the financial side of things, he offers two pieces of advice:

“It will sound like you put me up to this, but I would definitely contact Access to Finance… You’ll think you know it all and you won’t (…) it’s one phone call, and then you’re sort of on the train… it was very straightforward.”

Other News Stories
Go to Top